Warning: mysql_real_escape_string(): A link to the server could not be established in /home/www/crew.wildgardenseed.com/wp-content/plugins/statpress-visitors/statpress.php on line 305

Warning: mysql_real_escape_string(): A link to the server could not be established in /home/www/crew.wildgardenseed.com/wp-content/plugins/statpress-visitors/statpress.php on line 306

Warning: mysql_real_escape_string(): A link to the server could not be established in /home/www/crew.wildgardenseed.com/wp-content/plugins/statpress-visitors/statpress.php on line 307

Warning: mysql_real_escape_string(): A link to the server could not be established in /home/www/crew.wildgardenseed.com/wp-content/plugins/statpress-visitors/statpress.php on line 308

Warning: mysql_real_escape_string(): A link to the server could not be established in /home/www/crew.wildgardenseed.com/wp-content/plugins/statpress-visitors/statpress.php on line 309

Warning: mysql_real_escape_string(): A link to the server could not be established in /home/www/crew.wildgardenseed.com/wp-content/plugins/statpress-visitors/statpress.php on line 310

Warning: mysql_real_escape_string(): A link to the server could not be established in /home/www/crew.wildgardenseed.com/wp-content/plugins/statpress-visitors/statpress.php on line 311

Warning: mysql_real_escape_string(): A link to the server could not be established in /home/www/crew.wildgardenseed.com/wp-content/plugins/statpress-visitors/statpress.php on line 312

Warning: mysql_real_escape_string(): A link to the server could not be established in /home/www/crew.wildgardenseed.com/wp-content/plugins/statpress-visitors/statpress.php on line 316

Warning: mysql_real_escape_string(): A link to the server could not be established in /home/www/crew.wildgardenseed.com/wp-content/plugins/statpress-visitors/statpress.php on line 317
 The Chaff Pile | fresh threshings from the workers of wild garden seed | Page 3

The power of the quinoa is in the hills, at least around our parts where we need a slightly cooler nighttime temperature  in order for the Andean plants to set seed. And so, on a mildly rainy day last week we disappeared into the coast range and planted the quinoa starts at Frank’s house.

quinoa gets buddy-buddy with an apple tree

We also found some space for the last of our radishes, which were quite happy to join the quinoa outside.

Hydrating the radish starts before going out to be planted

This young buck was living in our manure pile

At the moment, we have completed transplanting out all of this year’s lettuce, our greenhouse full of plants has dwindled to a few stragglers here and there, and we are beginning to weed what we planted a month ago. Overwintered kale and mustard is beginning to set seed and others are in full bloom.  Everything is poised to jump up very soon!

Last week a great interview popped up in ACRES with Don Huber, the scientist who wrote to USDA secretary Tom Vilsack last Winter urging the agency to stop deregulating roundup ready crops. Huber claimed he and a group of scientists had found a previously unknown microorganism that thrives in roundup ready corn and soy products, and which correlated with infertility problems in livestock.

Monsanto was quick to refute his claims, saying, “Dr. Huber’s claims are in conflict with the weight of scientific evidence supporting the safety and beneficial impacts of GM crops”, but in this recent interview in ACRES Huber lays out the background for how this new organism came to be discovered.

Among many other things, including patiently waiting for it to dry out, we have been liberating our overwintering crop comrades from the stranglehold of the authoritarian winter weeds. Using a combination of lawnmowers and serrated hand sickles (“magic tools” in Wild Garden lingo), we are re-introducing our chard and collard crops to the idea of sunlight.

Here is a new video of Anaka describing how we do things:

This week we are getting more radishes in the ground, as well as parsley, epazote, quinoa, and leeks. Photos to come, of course.

Zoetic Seed is outstanding, like Pablo in this field.

Last week, our old friend and coworker Pablo came down off of San Juan Island for an unexpected visit, and helped us weed our collard greens.

Pablo worked for Wild Garden for a few years, and grew his own flower seeds on the side. This past winter, Pablo moved north, and started selling his flowers under his own company name, Zoetic Seeds. Check out his website, and if you are on the island, look for him at market!

p.s. he also makes really nice top bar bee hives that you can check out on the website…

It’s Earth Day today, and here at Wild Garden we celebrated by doing more of what we do every chance we can: transplant lettuce. By my rough calculations, we transplanted around a mile of lettuce today.

Anaka planting some lettuce. I know this photo has been used before, but fast trains have slow upload times, so y’all will have to wait for more pictures/videos.

James Cassidy of OSU Crop and Soil Sciences in the fields where the Hoo Haa will go down.

In addition, the Organic Grower’s Club at Oregon State University holds an annual “Hoo Haa” on this day, and my cohorts have plans to attend the festivities.

As for me, as I write this I am sitting on the Amtrak Cascades train, speeding on down the line, so each word I write is from a different beautiful location! Wowza! I am on my way to Mount Vernon, Washington, where the tulips of Skagit Valley will be in full bloom. Look for an exciting new video of Anaka coming soon…

It’s been a wet spring again here, and we’re taking organic matters into our own hands. We had a new idea to use my electric cultivating tractor with a modified toolbar to open furrows and draw lines. In two weeks we’ll come back and clean up our mess. 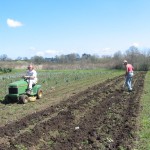 First, we mowed the beds down to the nubbins. 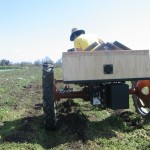 Then we cut a furrow with the cultivating shovels. The sweeps pushed the clods to the side. 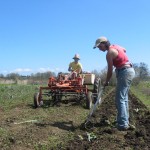 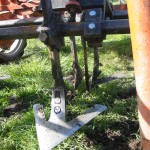 The shovel, sweeps, and rebar to draw a line 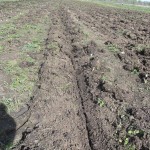 Lines in the sand (or clay) 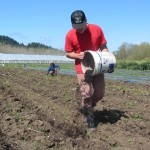 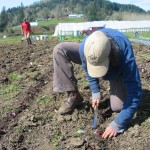 We have to get our crops in early so they have enough time to complete their life cycle and make seeds before the rains start in fall.

We have also been busy keeping our eyes out for flowering brassica plants that we do not want to cross with our seed crops. If you drive by Gathering Together Farm and see three wild, machete-wielding crazies scurrying about and chopping down plants, there is a good chance that it is us. In this video you will hear me heckling Anaka while she swings a big old machete. Check out the sound her blade makes!

A couple of interesting blurbs about Glyphosate, the main chemical compound in Roundup and other herbicides, came out this week, and I think they are worth sharing and taking note.

First of all, Don Huber, Professor Emeritus at Purdue University, has written a letter to the USDA asking that they reconsider their deregulation of glyphosate resistant crops in light of some new research he and other scientists are working on in which they say they have found a new organism in corn and soy. They say this new organism thrives in glyphosate resistant crops, and is possibly linked to infertility and spontaneous abortions in livestock, and is possibly harmful for humans as well. More research is being done at the moment, but the letter is interesting to read and is definitely something to keep an eye on.  You can read a Pdf of the letter here.

Secondly, an article from Reuters this week says that the Environmental Protection Agency is beginning an investigation on the safety of glyphosate, including allegations of links to cancer as well as infertility in livestock as Don Huber has said.

In other news, here at the farm we are using this window of good weather to navigate the wet soils and transplant like crazy. I suspect there will be some photos, stories, and video coming this week.

Foreward to the 1938 USDA Yearbook of Agriculture, Soils and Men. I sure wish our current USDA secretary would say something like this.

“The earth is the mother of us all — plants, animals, and men. The phosphorus and calciul

of the earth build our skeletons and nervous systems. Everything else our bodies need except air and sun comes from the earth. Nature treats the earth kindly. Man treats her harshly. He overplows the cropland, overgrazes the pastureland, and overcuts the timberland. He destroys millions of acres completely. He pours fertility year after year into the cities, which in turn pour what they do not use down the sewers into the rivers and the ocean. The flood problem insofar as it is man-made is chiefly the result of overplowing, overgrazing, and overcutting of timber.

own it in fee simple. The soil requires a duty of man which we have been slow to recognize. In this book the effort is made to discover man’s debt and duty to the soil. The scientists examine the soil problem from every possible angle.

This book must be reckoned with by all who would build a firm foundation for the future of the United States. For my part I do not feel that this book is the last word. But it is a start and a mighty good start in helping all those who truely love the soil to fight the good fight.”

-HENRY A. WALLACE, Secretary of Agriculture.

I just got back from a trip to Michigan to visit family, and wham, we are back outside working! This week we transplanted our first set of lettuce and spinach, and we will be planting more as soon as it dries up enough to prepare more beds.

Anaka and I ran the manure bucket brigade

The last part of the week was spent feeding some Scarlet Ohno Turnips, and Wild Garden Kale, with composted chicken manure mixed with terra preta.

It has been wet the past little while, and to get to the field we are currently working in you either need a high clearance four wheel drive vehicle, or a row boat.

too deep for boots, too shallow for boats; we scraped bottom

We also began work on an expanded deer fence for an old and new section of field. Friday was spent with an auger, gravel and shovels, securing the new corner posts.

When this fence is up, our seeds will be certified Deer-Free.

mapping out the new territory, known as "the back field"